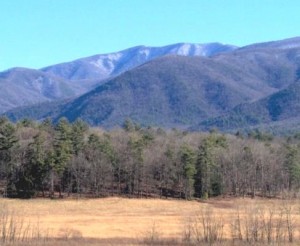 Thunderhead Mountain, located near Cades Cove and accessible from the Anthony Creek Trail, has a measured elevation of 5,527feet (1,685m) above sea level a its highest peak.  Near the Chimney Rocks, the mountain appears to have been used by James Spenser (the first known settler in the vicinity) for cattle grazing.  Indeed, by the late 19th century, Thunderhead had become a grassy bald.  The mountains lowest peak is perhaps its most famous.  Rocky Top (as made famous in the song by the same name) is a knob on the western portion of the mountain’s summit ridge with its rocky formation providing for the interesting name.

Thunderhead is made up of precambrian sandstone.  Thunderhead’s sandstone was formed between 500 million and 1 billion years ago from ancient ocean sentiment.  The mountain itself was likely formed around 200 million years ago when the North American and African plates collided forcing the rock upward.  This area is part of the Ocoee Supergroup,

Originally surveyed by Arnold Guvot 1859, the mountain has an interesting history.  During the Civil War, a group from the region attempted to build a wilderness settlement along the north slope.  The settlement was called the New World, but ultimately the settlers were not able to maintain their vision and the settlement failed.  As far back as the early 1900s,  Thunderhead was one of the favorite hiking destinations for outdoor lovers.  Indeed, the great grandson of the first settlers of Cades Cove, John W. Oliver began offering guided hiking tours of Thunderhead in 1924.  They trail he used, the Bote Mountain Trail, is still in use today and has become part of the larger Appalachian Trail.

Due in large part to the formation of the Great Smoky Mountains National Park, Thunderhead has reclaimed the land once cleared for pasture.  Only narrow paths remain for visitors to explore the area as the Park Service intends to hold to the strategy of natural reclamation of the mountain.

The path to thunderhead from Cades Cove begins at the Anthony Creek Trail.  This approach to Thunderhead actually cuts about 4 miles off of the hike when compared to the Bote Mountain Trail.  From the Anthony Creek trail head, the hike is approximately 7.5 miles to the summit of Thunderhead.  At the summit, you are likely to find forage coverage throughout.  During the late fall and winter months, you are more likely to find a view from the summit, but regardless of the season, the Thunderhead hike is a great opportunity to get a true flavor of the Smokies.