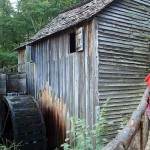 Milling lay at the heart of the small community which inhabited Cades Cove from the 1820s to the 1940s.  The old Cable Grist Mill can still be found around halfway up the Cades Cove loop road.  Built between 1865 and 1868, the mill was the economic core of Cades Cove and has been brought back into operation as an historic mill.

The amazing thing about the Cades Cove Grist Mill is that it is almost completely originally.  A winding pathway leads visitors to the quaint mill house, which is run by a group of dedicated millers employed by the national park.  The mill works by taking dry goods such as corn, and grinding them against a stone wheels into a fine powder or cornmeal.  This can then be used for a variety of cooking applications such as cornbread, corn muffins, and frying batter.

The Cable Grist Mill features two separate millstones, which are original to the 1868 construction.  Every few years, the stones are re-chipped and sharpened by hand to ensure they can produce a fine grain.  Traditionally, Cades Cove settlers would bring their corn to the mill in return for a one-eighth share of the final product, which was retained by the miller as a usage fee.

Operating as an overshot mill, the mill works by directing stream water over a wooden, water wheel located outside the mill house.  The water causes the wheel to turn, which, in turn, causes a series of gears to rotate.  These gears then turn one of the mill stones called a runner stone, which would grind the corn or wheat against the second stone called a bed stone to create powder.  Cables mill features 6 gears, which were originally constructed from metal.  Over time as the mill generated income, these gears were replaced by more durable metal gears.  Together, the gears create a turning ratio of 25:1, with each rotation of the mill turning the mill stone 25 times.  The source of the mill’s power is a stream that lies only about 150 yards away from the main building.  A canal was built between Mill Stream and the mill to direct the water over the mill wheel.  A series of water gates were included in its original construction to help control the flow of water.

At its peak, Cades Cove was home to 6 or 7 mills, which is evidenced by the numerous millstones in the area.  Cable Mill is the only surviving original mill in the area and was restored in the early 1930s.  Today, the mill is in operation daily between April and October and visitors can catch a glimpse of what life was like for Cade Coves’ early settlers by seeing it in action.  Volunteer millers are on hand to answer questions from tourists, who often mistake the mill for a water treatment facility.

The charm of the mill is not lost on visitors and photographers.  It is undoubtedly the highlight of the area and is a frequented attraction along the Cades Cove loop road.  Photographers have long used the old Cable Grist Mill as a muse and it can be seen featured on many posters, magnets and other memorabilia from the Great Smoky Mountains.