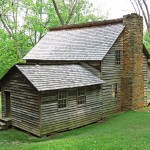 The Tipton Cabin in Cades Cove

Revolutionary War veteran William Tipton is generally credited for starting the pioneer migration to Cades Cove in the 1820s.  Along with his brother Thomas, William received Tennessee land grants covering the Cades Cove area in recognition of their contribution to the war.  In turn, the brothers invited relatives from other parts of the country to buy up land and settle in Cades Cove, thus starting the initial settlement boom in the region.

In 1878, descendant Hamp Tipton built what is today known as The Tipton Place along the current Cades Cove loop road.  Today, the two-storey timber framed house stands as a major historical site visited by thousands of people each year.  Along with the simple home which transports visitors back to the late 1800s, Tipton Place features a number of surrounding structures and features.

Once the home of one of Cades Cove’s first blacksmiths, there is still a blacksmith shop behind the house, which is open for viewing.  Additionally, there is an apiary, smokehouse, corn crib and nearby cantilever barn.  Together, the structures paint an evocative picture of life as a farmer in the late 1800s.  At the time, many farmers made honey to supplement their income despite the fact that it presented a danger in attracting local bears.  The smokehouse was used to smoke meats gathered from hunting and the corn crib was used to store corn from the harvest.

Though there are many historic Cades Cove building, Tipton Place is among the best preserved original homes in the valley.  To reach the compound, simply follow the Cades Cove loop road past Hyatt Lane and Dawn Lawson Place.  Make sure to stop by this home site during your Cades Cove visit.