Visitors to Cades Cove come for both the region’s history and natural splendor.  Best known as a pioneer settlement in the 1800s and as a former Cherokee territory, Cades Cove is also home to a wealth of plants and animals throughout the year.  In fact, many visitors travel to Cades Cove to catch a glimpse of the local wildlife. 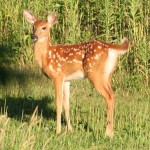 Whitetail deer sightings are common throughout Cades Cove.  Sometimes called the Virginia deer, groups of them are frequently spotted along the many hiking trails which cut through the forests around Cades Cove.  Whitetail deer are quite active in the early morning and about an hour before dusk.  They can best be spotted in forest openings without thick shrubbery. 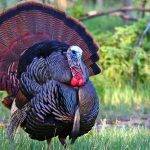 A far cry from what most Americans are used to seeing on Thanksgiving, the wild turkeys that call Cades Cove home are sleek and fast moving.  The turkeys tend to be most active in the morning and are often spotted at the entrance to Abrams trail.  Occasionally, turkeys can be spotted and easily photographed from the Cades Cove loop road itself. 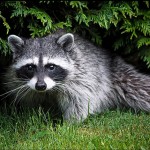 Though raccoons are prevalent throughout Cades Cove and the rest of the Great Smoky Mountains National Park, they are mainly nocturnal creatures and are typically not seen during the day. 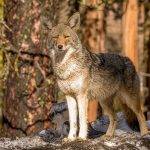 Coyotes only arrived in Cades Cove in the 1980s and work to control the population of smaller animals in the area.  Though quite quick, they can sometimes be spotted just before dusk in open fields. Cades Cove is home to a number of skunks, which can easily be spotted thanks to their distinctive black and white striping.  Though skunks pose no real danger to humans, be wary of accidentally frightening skunks as they will spray as a defense mechanism.  Because they have a tendency to cross the road, it is important to keep a lookout for them when driving through the Cades Cove loop road.

Black bears are occasionally spotted around Cades Cove, especially in the summer months.  They feed on the blackberries which grow in the area.  According to the National Park Service, it is important to keep a safe distance from black bears.  Do not approach the bear, but instead slowly back away.  If the bear begins to give chase, hold ground and vocalize loudly in an attempt to intimidate it.

There are a number of other animal species which can be found in and around Cades Cove including meadowlarks, finches, foxes, otters and beavers.  Due to the high number of visitors in the summer and early fall, wildlife enthusiasts typically have follow trails deeper into the forest in order to have a better chance of viewing or photographing local wildlife.  A few species, such as the whitetail deer, have become acclimated to humans over the decades and are generally not bothered by their presence.

Keep in mind that feeding wildlife within the Great Smoky Mountains National Park is not permitted.  As a rule, visitors should not knowingly come within 150 feet of bears.  Additionally, disturbing wildlife in any way is generally prohibited throughout the park as this may lead to changes in behavior.  The Park Service recommends to back away from any animal exhibiting a change in behavior due human presence to the point where the animal resumes normal activity.

This website uses cookies to improve your experience while you navigate through the website. Out of these cookies, the cookies that are categorized as necessary are stored on your browser as they are essential for the working of basic functionalities of the website. We also use third-party cookies that help us analyze and understand how you use this website. These cookies will be stored in your browser only with your consent. You also have the option to opt-out of these cookies. But opting out of some of these cookies may have an effect on your browsing experience.
Necessary Always Enabled
Necessary cookies are absolutely essential for the website to function properly. This category only includes cookies that ensures basic functionalities and security features of the website. These cookies do not store any personal information.
Non-necessary
Any cookies that may not be particularly necessary for the website to function and is used specifically to collect user personal data via analytics, ads, other embedded contents are termed as non-necessary cookies. It is mandatory to procure user consent prior to running these cookies on your website.
SAVE & ACCEPT