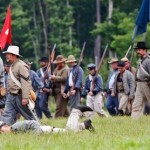 The Civil War and Cades Cove

Just 50 miles from Knoxville, Tennessee, the Cades Cove area was not immune to the Civil War.  In fact, Tennessee as a state bore a large brunt of the war, with only Virginia laying claim to more battlegrounds throughout its entire duration.  Despite the fact that the state seceded from the Union and joined the side of the Confederates, not all Tennessee residents agreed with this position.  Many, including residents in and around Maryville and Cades Cove, were staunch abolitionists and set up the area as a stop on the underground railroad in the year preceding the war.  Some even went as far as fighting alongside Union soldiers in battle.

Earning a reputation as a pro-Union region, Cades Cove was targeted by the Confederate Army. Harnessing the entire power of the community to their cause, children of abolitionists were employed as lookouts around strategic spots along the valley to help warn residents of incoming Confederates.

Most notably, the settlement was subject to a series of vicious raids in 1863 in which Confederate soldiers stole livestock and killed anyone suspected of being sympathetic to the Union.  Barn burnings and other threatening acts by Confederate soldiers haunted Cades Cove throughout the war and forced many of the area’s pro-Union leaders to go into hiding.  Harnessing the entire power of the community to their cause, children of abolitionists were employed as lookouts around strategic spots along the valley to help warn residents of incoming Confederates.

Weary from the constant raids, prominent Cades Cove resident Russell Gregory assembled a small fighting force consisting of able-bodied men from the cove.  Around Abrams Creek, which now stands as a popular trail destination within the Cades Cove Loop Road, Gregory and his men fought back a band of Confederate soldiers in order to put an end to the Cades Cove raids.  While the battle proved effective, Gregory himself was subsequently targeted by the Confederate Army and killed several weeks later.

Like so many areas of the southern states, the small community at Cades Cove was devastated by the Civil War.  While a care population remained in the remote Tennessee Valley, the region as a whole would take decades to recover.  By the turn of the century, Cades Cove would once again find its footing as a productive, yet rural community.  Today, this way of life has been preserved through the Great Smoky Mountains National Park along the Cades Cove Loop Road.  Each year, hundreds of thousands of visitors discover this remote area to learn about its colorful past.