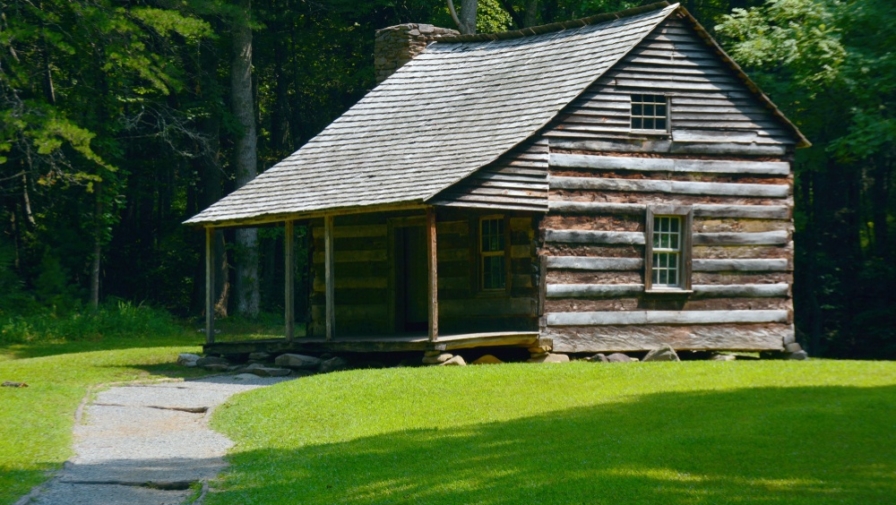 On the Cades Cove Loop Road, the Carter Shields Cabin is the final historical structure available for the general public to visit. It is thought to have been constructed in 1830. It’s a basic one-bedroom cabin that’s the only structure left on the land. The cabin is located in a clearing and has a covered porch. There’s also a little loft. The dogwood trees bloom in the spring, creating a lovely scene. Because of the trees, the split-rail fence, and the deer that frequent the area, photographers flock to this location. In fact, it’s one of Cades Cove’s most photographed historic structures! It’s the ideal conclusion to your tour of Cades Cove’s history.

You will be allowed to go inside the modest historic cabin and look around! The Carter Shields Cabin is open, and available to the public.

Although he is the namesake for the cabin, Carter Shields didn’t live in the dwelling until 1910, despite the fact that it was built in the 1830s. George Washington “Carter” Shields was a Civil War warrior. At April of 1862, he was disabled in the Battle of Shiloh. Shields chose Cades Cove as his retirement location and stayed in the Carter Shields Cabin from 1910 until 1921.

Visit today to get a true perspective of the way life was in Cades Cove.

This website uses cookies to improve your experience while you navigate through the website. Out of these cookies, the cookies that are categorized as necessary are stored on your browser as they are essential for the working of basic functionalities of the website. We also use third-party cookies that help us analyze and understand how you use this website. These cookies will be stored in your browser only with your consent. You also have the option to opt-out of these cookies. But opting out of some of these cookies may have an effect on your browsing experience.
Necessary Always Enabled
Necessary cookies are absolutely essential for the website to function properly. This category only includes cookies that ensures basic functionalities and security features of the website. These cookies do not store any personal information.
Non-necessary
Any cookies that may not be particularly necessary for the website to function and is used specifically to collect user personal data via analytics, ads, other embedded contents are termed as non-necessary cookies. It is mandatory to procure user consent prior to running these cookies on your website.
SAVE & ACCEPT